(too bad the Soviet inf model has no flamethrower variant)

Assault groups originated during the defense of Stalingrad and were used through the war, up to the battle of Berlin. They wore steel body armor (about 2-3 mm thick) which provided protection against melee weapons, small shrapnel and sometimes bullets. They were mainly deployed during urban battles where their slower movement speed (due to armor weight) mattered less than their close-range protection (especially against SMG fire and hand grenades).

Looks cool Image 4 isn’t loading for me. However weren’ t the Americans the first who used bodyamor in WW II?

Ok, I googled up a few more pics of the same. Let’s see if they show up for you. 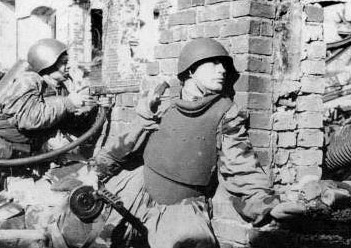 Everythings showing up for me. Firefox

yep for me now too